One of the difficulties of living here is the logistics of bringing things from the home country or sending gifts to friends overseas.  Often it entails weeks of planning in advance, finding the needed object online, mailing it to a dear friend's address, then coordinating its delivery to a person who happens to be coming to Ho Chi Minh City, and arranging for the friendly "carrier" to bring it in his or her baggage.  Today, at a coffee klatch in a room full of strangers, a woman offered 50 USD to anyone who could arrange for her four kilogram (8.8 lbs.) package to be couriered to the States. She didn't hint at what was in the box, but maybe it was a very special, and, almost untimely, gift to a loved one.

As Lewis Hyde, essayist and cultural critic, wrote in the introduction to his book The Gift, "a gift that cannot be given away ceases to be a gift.  The spirit of the gift is kept alive by its constant donation."  People living overseas really want to keep the spirit alive with those we love.

Since arriving here, I have experienced many gifts of the spirit, to which he refers in this passage.  Like so many Americans, I mistakenly decided to keep the "constant donation" alive through commercial means.  In gratitude for the people in my life, I went to Amazon to purchase gift cards for people dear, but not near.   I should have given a gift of the spirit to my intended "audience," those who I hoped would receive the gift cards, because sending "things" from Viet Nam is too costly.  And because I have paid in other ways...

As it turned out, the gifts never arrived.

The transcript of my first attempt to purchase an Amazon gift card from Viet Nam.
I never received a return call about the problem I raised in my online chat with the customer rep.  Granted, we are fifteen hours ahead.  When I contacted Amazon customer service over my voice over IP phone, the second time, I was informed that they suspected someone had been trying to make fraudulent charges on my account.  I didn't know if I should be alarmed or annoyed, especially since my intended gift recipient has been on my Amazon account since I started purchases with them at the beginning of time, ergo the business' inception.

My conversation with Jeremy, my third Amazon customer service rep, went something like this when I tried to offer the needed details about the transaction in order to prove I wasn't a fraud:

Jeremy: Can you please give me your billing address?
Me:: Which one do you want? Here is my p.o. box....
Jeremy: Cool. But uh..that isn't what we have on file.
Me: Then you must have......
Jeremy: Cool.
Me: But if it looks like the purchase was made in another state, it is because I live in Vietnam. And we have this whole thing with censorship here, so I use other methods when I am online.
Jeremy: Cool. Uh..I am sorry, I just kinda forgot. Vietnam?
Me: You know in Asia....
Jeremy: (Silent)
Me: You know over by Japan, China? We are fifteen hours ahead, if you are in Seattle by the headquarters.  So if someone from Amazon calls me, then please make a record of the time difference in your notes, okay?
Jeremy: Cool. So you are like on some sort of Army base or something?

The issue is still unresolved, and I never heard from the investigation unit. My cloak of online anonymity closed the easiest avenue to express my gifts through commercial means.

So what was a woman to do?

I hadn't seen this entry in the urban dictionary when I first set up the site. Perhaps because it was censored.
Finding this web entry caused an existential crisis.
Was this website just a titanic temper tantrum?
What if people thought I was really like a spoiled expat? Maybe I am?
What other derogatory meanings come up for Saigon Sally?
Are they reserved for promiscuous women?
Why do the cool kids know this slang, and I don't? I've never heard it used here...

More searches revealed how Google can pull up other associations that only seem to further confound  my online identity. 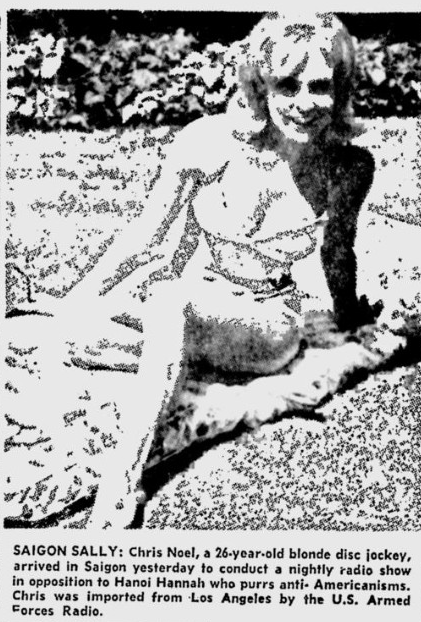 Montreal Gazette, Dec. 19, 1966
According to current resources, Chris Noel wasn't the true Saigon Sally either.  In her autobiography, she recounts her efforts in Southern Viet Nam as a disc jokey and performer for the American soldiers after having felt called here to offer the soldiers the gift of viewing her as a fantasy fulfilled.    "A Date with Chris" and her visits to the troops allowed her to offer a candied version of womanhood and perhaps a break from the reality of the war.

According to Chuck Howard, in Vietnam Magazine, December 1996, "Noel broadcast a radio show from Saigon, countering the voice of Hanoi Hannah. "Of course, I also knew about Saigon Sally, the Vietnamese woman who traveled around the Saigon area broadcasting on portable transmitters," said Noel. "Her morale-deflating show [which supported the North] ended while she was on the air. The last sounds were a crash, gunfire, and a man's voice, 'You have just heard the concluding saga of Saigon Sally.' I knew this could also happen to me." (During the Tet offensive, a bullet entered the American Forces Vietnam Network studio in Vietnam, piercing the ceiling and two pages of news copy and embedding itself in the newsman's typewriter.)"  Noel survived.  However, like many servicemen from abroad as well as national Vietnamese, she also experienced post traumatic stress disorder from the brutality of the war.

While Noel crooned a happy gloss over the conflict, the Hanoi Hannah, about whom the Montreal Gazette claimed "purrs anti-Americanisms", focused on the sad realities of the war in her broadcast, which aired three times a day.  According to a New York Times interview conducted in 1994, (Ho Chi Minh City Journal; Hanoi Hannah Looks Back, With Few Regrets, By PHILIP SHENON) she wanted to "make the G.I.'s understand that it was not right for them to take part in this war," she said. "I talk to them about the traditions of the Vietnamese, to resist aggression. I want them to know the truth about this war and to do a little bit to demoralize them so that they will refuse to fight."

Where American messages to the troops were meant to lift moral, Hanoi Hannah received briefings from the Vietnamese military and used updates from the American press to persuade American G.I.'s to lay down their arms.  According to The Vietnam War, by James E. Westheider, 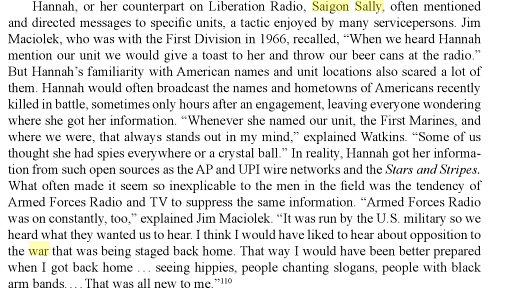 page 89
In addition to radio broadcasts, flyers from both sides were released to persuade their intended audiences. 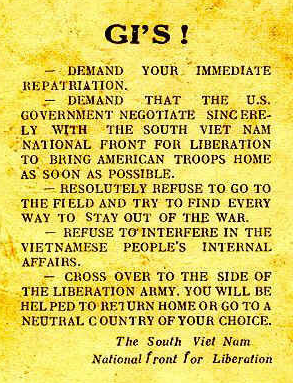 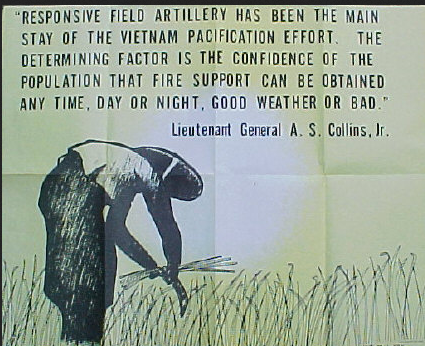 Peace earned through warfare?
The technology available to them at the time, radio and leaflets, shared a degree of anonymity.  Saigon Sally and Hanoi Hannah were monikers the servicemen gave to unknown voices.  They really didn't know who these women were, what they looked like, or their true identities.   The voices on both sides of the propaganda machine were representatives of ideals, such as home, pride, and solidarity as well as of their group, the Armed Forces or the Voice of Viet Nam.

Anonymity has its cost.  Anonymity is sometimes a necessity in order to convey what must be said.  What is important to say may carry not only its present meaning, but also the weight of the historical and cultural context that preceded its utterance.  Chris Noel, Saigon Sally, and Trinh Thi Ngo (Hanoi Hannah) may have believed deeply in what they were saying during the war and certainly saw their messages, nuanced or straight forward, complicated or soothing, fostering action or refuge, as gifts to their people and to the American soldiers.

As Lewis Hyde wrote, we should not be concerned with "gifts given in spite or fear, nor those gifts we accept out of servility or obligation...(but) the gift we long for, the gift that when it comes, speaks commandingly to the soul and irresistibly moves us."

Certainly much of the spirit of their gift was made in fear or from a sense of duty. However, each woman wanted to connect with an essential human part of their listeners.  Soldiers in the fields may not have known their names, nor the true identities, but the women spoke to "move" them, to speak to a deeper part of the men that longed for peace and not war. In this way, perhaps, their legacies have been to have a lasting relationship with their listeners.

In some way, the motion of their gift continued after the war ended.  Chris Noel advocated for veterans and runs a homeless shelter in Florida.  Trinh Thi Ngo, for her part, returned to the normal life in Ho Chi Minh City for which she fought, and "if she did once feel anger toward the United States, Mrs. Ngo insists that she put it behind her years ago" (Shenon, P). Compassion and forgiveness are the greatest gifts that should be always in motion.

With the difficulties of living here, I am reminded yet again the gift is "unlike the sale of a commodity, (because) the giving of the gift tends to establish a relationship between the parties involved.  Furthermore, when gifts circulate within a group, their commerce leaves a serious of interconnected relationships in its wake, and a kind of decentralized cohesiveness emerges."  As Saigon Sally, I am even more aware of the interconnected relationships I have with the name, with the history here and at home, and with my audience.