Coming from the West Coast of the United States, I have been steeped in the attitude of live and let live. Do not judge. Behind this perspective is a lingering history of prejudice.  Even the liberal-minded San Francisco had its history of brutalizing and ostracizing Asian workers, forming not only Angel Island, but also the enclaves of Chinatown.  Japanese internment? The fear of cultural difference breeds paranoia.  In the late 1980's, a classmate in high school claimed gay men were the cause of HIV/AIDS crisis and that all should be put on an island to be bombed. (Based on Facebook snooping, I suspect he is now out of the closet.) If our prejudice leads to injustice based on perceived cultural differences, isn't it better to suspend judgments of all kinds?  Who is an individual to say one behavior over another is wrong?

To adopt this philosophy, one needs to constantly check for personal bias and ask, "Does this situation bother me because it is the way I have been raised? Or because it is wrong?"

Cultural relativism, long a key concept in anthropology, asserts that since each culture has its own values and practices, anthropologists should not make value judgments about cultural differences.  As a result, Anthropological pedagogy has stressed that the study of customs and norms should be value-free, and that the appropriate role of the anthropologist is that of an observer and recorder.
Carolyn Fluehr-Lobban, Cultural Relativism and Universal Rights, 1995

As anthropologists note, to be the observer in another land is to observe one's own behavior as well as community in which one finds herself.  So, I find I am constantly questioning my own attitudes simultaneously as I mentally record the behavior and attitudes of those around me, Vietnamese nationals as well as other foreign expats.

If you've done some background research on the culture, you may have read that Vietnamese people can be quite frank.  The market stall saleslady may state that your feet are too big if she has no shoes above a size 7 (US) on hand.  If you are looking haggard, an employee may tell you that you look awful.  Just fill in the blank: fat, skinny...anything we may take offense to, but if it seems to fit the occasion, then they will tell you.  It isn't all negative either.  Someone told me that I had beautiful earlobes, (which I may describe as fairly large), because apparently this shape is a sign of good luck.  I've also had a plump gym secretary tell me she could whip me into shape, even though I am pretty sure I am fitter than she.  With a healthy dose of cultural relativism, it is easy to laugh at these comments and to take them for what they are: an individual's view of body shape and health.

Cultural relativism becomes more difficult when going beyond comments about body shape.  For example, in a Korean restaurant I watched as a young woman fed her boyfriend by hand.  She shook off the water from the lettuce leaf, proceeded to fill it with meat, wrap it, and then bring it to his mouth.  He sat back, like a king, with his hands resting on the back of the booth.  Yes, it is hard for me to not pass judgement as you can see by the metaphor.  Perhaps I could bring even more preconceived notions and make an assumption about her relationship to him, like maybe she was a concubine or something; however, such a thought would be treading even further from my role as observer, which is a process I am trying to control.  Moreover, I think such assumption is dangerous because it further objectifies the woman.  But is she objectified? Again self-doubt.  I have witnessed an educated, professional woman acting the same way, bringing food to her husband, holding it to his mouth, and feeding him before eating herself.  As a Western woman, such a sight makes me cringe.  The words ring in my ears by other female expats complaining about how they are treated as women here.

One hundred women are not worth a single testicle.
Confucius (551-479 BCE)

Since the communist revolution, the government has attempted to confound the influence of Confucius in gender relations.  "1992 constitutional article: “Male and female citizens have equal rights in all political, economic, cultural, social and family aspects. It is strictly forbidden all discriminating actions against women, violations of the dignity of women.”  (The Women’s Studies Department, Vietnam National University, School of Humanities and Social Sciences, Ho Chi Minh City)  In a previous post, I've written about the gender inequality here in comparison to the situation in the United States, so I am not going to go into the effectiveness of governmental actions now.  Certainly I am not immersed in the culture to understand the nuances of gender relationships at this point.  Yet I can record how a friend complained the other day that she was tired of having people look at her husband while not looking at her as a means to include her in the conversation.  And then there is the "husband card".  I've heard also of a wife telling service providers that her husband, referred to here as "Sir", wasn't happy and the situation had to be fixed.  Even I have cc'd my husband in emails and letters when I need to add more weight to my request.  Certainly all of this is anecdotal, but isn't that the way of the anthropological recorder?

A common social activity is tennis.  My nom du courte happens to be slugger, and I play like a gorilla with a racquet in hand.  Lessons? Yes, and fortunately I've found a nice group of women who tolerate and sometimes encourage me to continue with my malformed moves.

On one side of the court is a canal with some livestock nestled on the opposite bank next to a primary school playground.  A couple of weeks ago, we noticed a squealing sound coming from across the water, which seemed often to coincide with me hitting the ball over the 30 foot mesh fence far into "left field".  So, of course, my play added to the court jesting about making pigs squeal.  All in good fun, right? 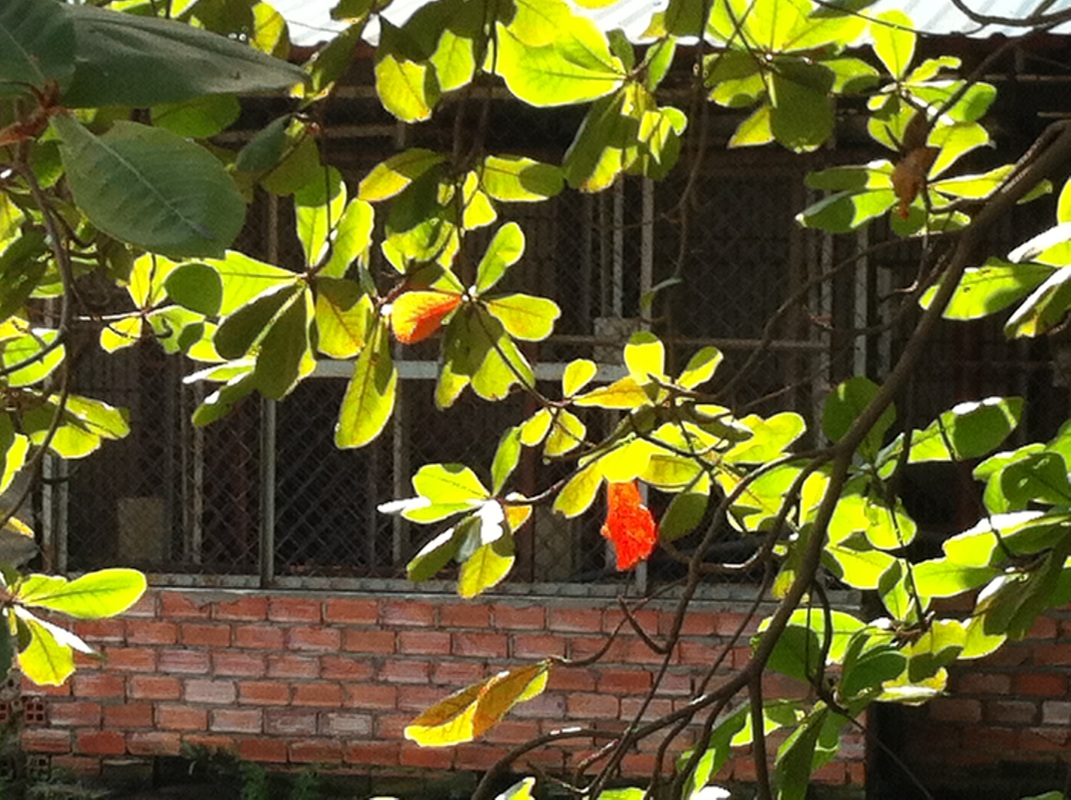 The enclosure across from the tennis court.
This week I steadied my nerves and worked on being more focused than ever before.  It was a goal to avoid hitting a single ball out of the court. I also hoped to give the women a reason to invite me back.  The first goal was met; however, I am not sure I want to go back.

It turns out, the squealing sound isn't made by pigs.  Look at the video. Can you tell what is in there?
We were all comfortable playing on the court when we thought it was a pen full of pork behind us.  The noise was distracting, but something easily shrugged off.  However, it took an ominous timber when a friend relayed that it is from the bears being used for bile.  Watch closely.  Do you see the pacing bear in of the shot? Expand the image if you can.  This is a sign of a distressed animal.  The cage is cramped. There is no enrichment for the animal, so it paces in that constant loop.  Count the cages. How many are bears are there? Are you saddened? Uncomfortable? Outraged?

Standing on the court, knowing the bears are there and won't be going anywhere, I felt very uncomfortable.  My head told me that to the bear owners it is just like keeping pigs, only more lucrative.  I thought, We were all fine thinking they were pigs.  How is this any different? Yet my body became on edge every time I heard the animal whimper.

The cultural relativism scope reminds me that we use animals for medical purposes, to prolong the lives of people everywhere.  The first insulin was only available from cows and pigs; however, according to the resource Endocrine Web, the insulin was taken from already slaughtered animals, not siphoned from living creatures.  Furthermore, living animals are used as medical models for new medical treatments, and the medical community in the West argues that most advances in human health wouldn't exist to date without them.

According to  Ben Kavoussi of Science-Based Medicine, using bears for bile for medicinal uses is big business. "Bear bile is sold in Asian apothecaries throughout the world in the form of powder, solution or pills. It is likewise the key ingredient in many Asian “patent medicines” used for tapeworm, childhood nutritional impairment, hangovers, colds, and even cancer. Bear bile is even found in Chinese throat lozenges, shampoo, wine, and tea."  (Asian Bear Bile Remedies: Traditional Medicine or Barbarism?, 2011)  The author is very open about his opinion on the issue, concluding, "As I wrote his article, I was overwhelmed with rage, and repulsed not only by the horrific images of the animal holocaust in Asia, but also by the enormous hypocrisy of the proponents of TCM, who effectively claim that pus-infested bear bile, and the by-products of animals tortured, disfigured, and dismembered in the name of the“natural” are better, safer, and “gentler” than synthetic pharmaceuticals."  (The website also has a bias and a persuasive purpose, which they opening state.)

In Vietnam, a milliliter of bile might sell for $3 to $10; about 100 milliliters can be extracted from a bear each time, according to Annemarie Weegenaar, the bear and veterinarian team director at Animals Asia’s Vietnam center. 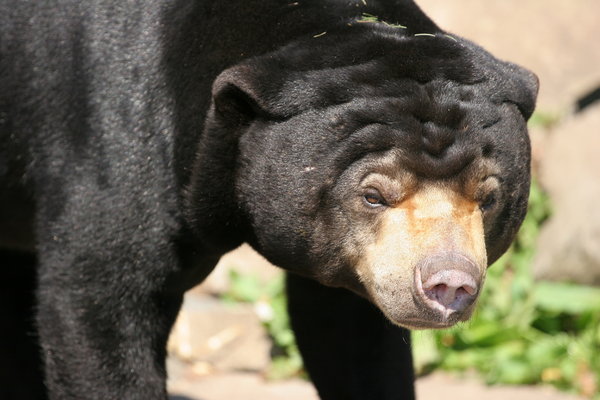 When I asked a Vietnamese man about the bear bile, he explained to me that mat gau is used to treat high blood pressure.  Once for 5cc, he paid 500,000D ($25 USD)  to add it to rice liqueur. It was so bitter tasting, he wouldn't try it again.    While he needed a translator app to convey his meaning, I didn't have the sense that he saw anything wrong with using the bears in this way. Why should he? There is over 2,000 years of tradition behind the practice.

There are a few rescue centers that pay the bear farmers for their livestock.  According to CNN's Peter Shadbolt, the trade in bear bile is illegal (A Second Life for Vietnam's Bile Bears); yet this small farm is squeezed between an established apartment complex and an international school.  The rumor is that the owner has connections with the government and is allowed to carry on with harvesting the bile.

Clearly the Sun bear dilemma is one area wherein the West disagrees with a tradition held in Asia over thousands of years.  While I try to be "open-minded" about what happens here, I find myself, more often than not, discomforted by what I see.  Inside is a nagging voice to not judge, however, as I know I have my own prejudices and historical biases.  Yet the most surprising circumstances imbalance me from my cultural relativism perch.

It's as a wise woman once told me: "When you get off an airplane, the first person you meet is yourself."  Thanks, Julie, this is as true as ever and may be the only "Truth" out there.
TAGS: Gender equality, Asian sun bears, bear bile, cultural relativism, anthropology
UA-50707318-1 UA-50707318-1