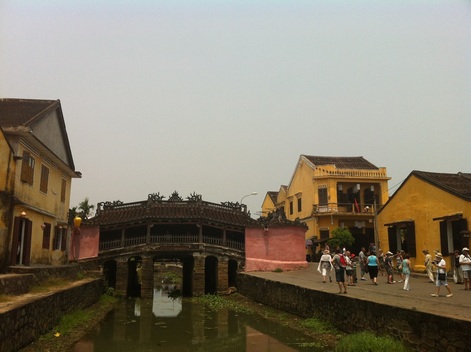 Outsiders learn about the rich history and locals benefit economically.  UNESCO World Heritage Sites hold the potential to bring these two populations together through the promise of tourism. Yet in a nascent environment, even one open for the last fifteen or more years, things can go askew and the experience becomes incredibly unbalanced.

Ancient Town in Hoi An is such a place.  Hoi An has a rich history, at one time being the main trading port for the Cham, a Hindu society, where Persian, Arabs, and Chinese came for jewelry and glass.  Later, when the Vietnamese (Dai Viet) conquered the area and China banned exports to Japan, it became the hub of commercial activity between Chinese and Japanese merchants.  The link between the two communities was the Chua Cau (Japanese bridge) that has been rebuilt so many times only the some pillars and beams remain from the original structure.   Like a bridge between East and West, Hoi An saw the entrance of Christianity through the Jesuits, who transformed the written script of the Vietnamese language (quoc ngu).  The town also was the center of the resistance to colonialism and the August Revolution, but fell into relative quiet until 1999 when it became a UNESCO site.

Thanks to fortunate opportunities, the old town of Hoi An, an unique concentration of architectural monuments of various forms: living house, assembly hall, communal house, pagoda, shrine, temple, water well, bridge, market, wharf...has been preserved intact.  They are along the streets that cut one another, forming palaces and giving a good example of symbolic oriental cities in the Middle Age.  So wonderful with its old aged traditionally well kept cultural activities, habits and customs, the town is now a wonderful living museum of architecture and urban life style.
Office of Tourist Services Pamphlet, Hoi An 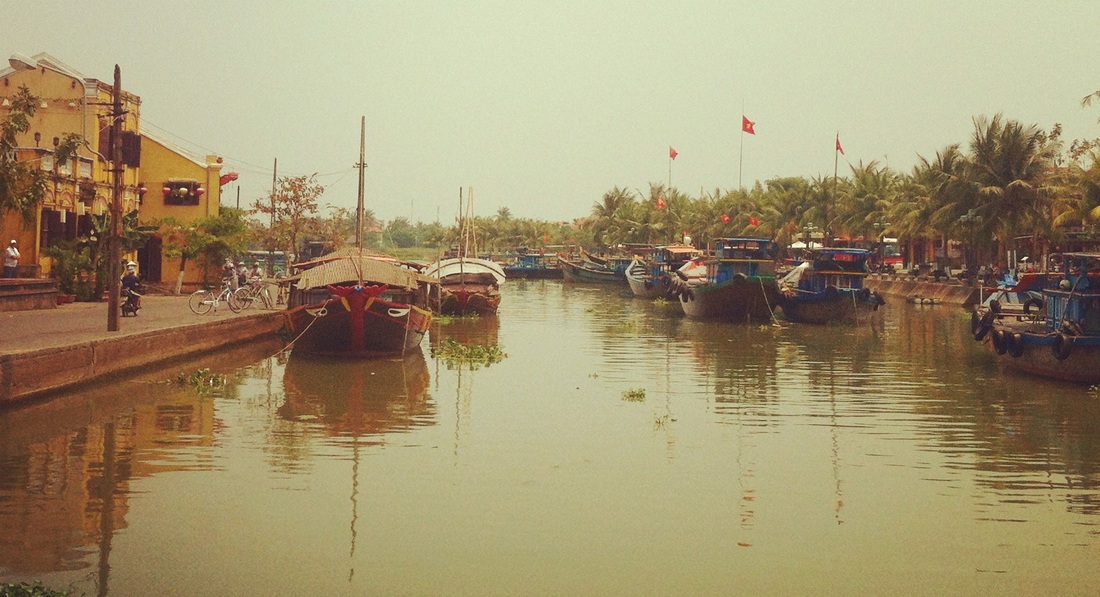 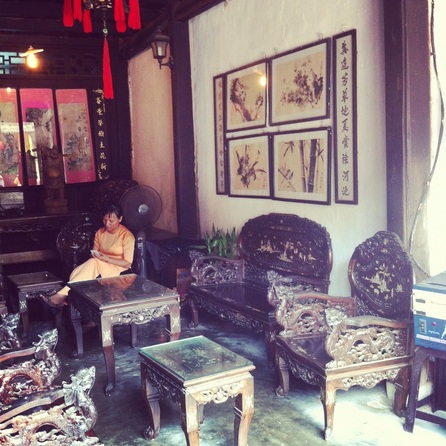 Applauded by UNESCO, Ancient Town created a ticketing system allowing visitors to see any five of the twenty-one historic sites.  The community has used revenues from these sales to improve people’s homes, which are registered sites.  However, the rich history can easily be lost amid the commercialism.  There are few signs in any language that explain the significance of the artifacts.  One can wander from location to location following the map given to you when you buy the tickets without learning much about the past. If you travel without a guide, don’t be surprised if a “resident” of the Old House of Phung Hung acts as if she will tell you about the history of the house but instead steers you toward various “handmade crafts” for sale throughout the house. In 2007, there were 180 tailor and clothing shops and 202 souvenir and handicraft shops. (IMPACT: Hoi An, Viet Nam, UNESCO) 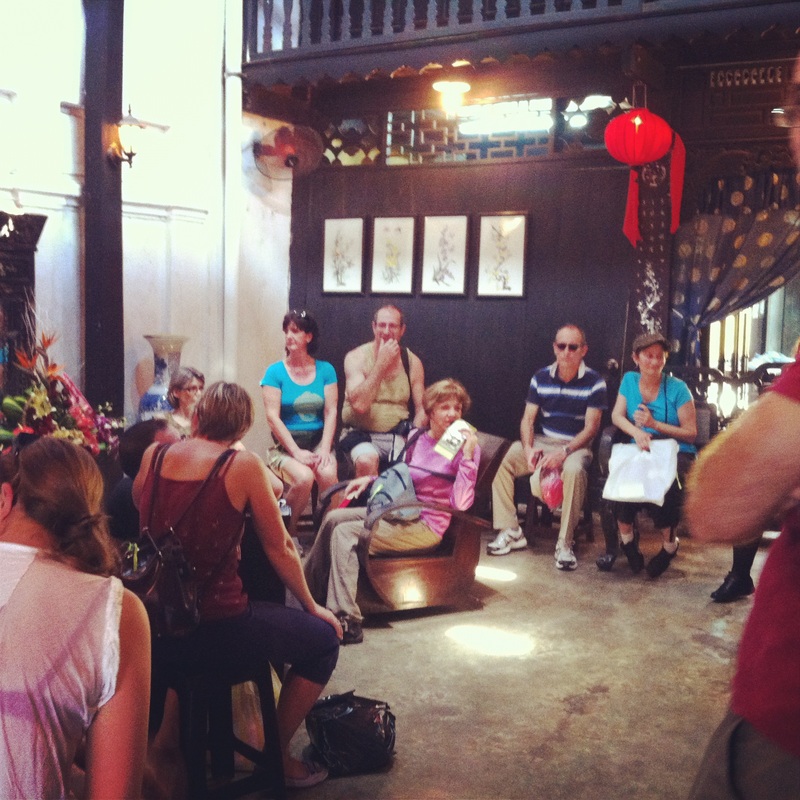 Know Your Right
Proposition: Please dress decently. Sleeveless blouse, drawers and over the knee skirt or dress are not welcome inside the sightseeing places.

Perhaps a town that has such deep mercantilism roots should eventually express this history to the outsider through rampant commercialism.  A good example of this expression in Hoi An is that it promotes itself as lantern town, and lamps are sold in most of the souvenir shops and even in some the restaurants.  One can even sign up to learn how to make them.  It has a Lantern Festival; however, the craft only came to be recently.  “Lanterns were not traditionally made in Hoi An, but the skills and materials (bamboo and silk) used to make these products have deep roots” (IMPACT: Hoi An, Viet Nam, UNESCO).  Culture and industry changed as a result of tourism dollars.

Of 47 restored state-owned buildings, 26 were rented or re-purposed for souvenir shops, galleries, restaurants, or retail space according to the report.  Many of the residents have moved to cheaper properties outside the Ancient Town area, experiencing gentrification that puts home ownership out of reach of some.  Even though incomes increased through the influx of tourism dollars, so have the prices of other things.  Cost of living increases impact food sources as well.  Nestled between the ocean and a river, there should be plenty of fish for the locals; however, the best fish is often reserved for the tourist market.   In 2007, 64% of the town’s revenues came from tourism (IMPACT: Hoi An, Viet Nam, UNESCO), leaving the poor more affected by the increase in cost of living.
What does this look like to the average foreigner tourist? It means sitting in a restaurant and having an elderly lady beg you to buy roasted peanuts for 20,000 Dong.  Restaurant workers don’t stop different hawkers from coming to your table multiple times.  For the local, it can mean economic hardship. More sadly, it also means the commercialization of important rituals and ceremonies that are performed as entertainment for foreigners.   The spiritual loss is perhaps the bigger price paid in the name of poverty alleviation.

Certainly there are environmental costs due to tourism as well, which impact the livability of a place for the residents.  In the 2007 UNESCO report, they mention the area was beginning to put in covered sewage pipes.  However, in 2011 monsoon rain and the excess water from dams to the north caused widespread flooding of parts of the town.  Since the town is at sea level, the rising river and resulting floods can make the sewage and rainwater mix, flowing into people’s homes, regardless of new underground pipes because households do not have back flow valves.  More tourism also means more sewage and trash.  Tourists have been moved to non-flooded hotels during these storms, but the locals weather them as they have done over hundreds of years.
At this point, I feel very mixed about the balance between tourism's benefits and its negative impacts in a developing economy. Unfortunately when mercantilism and scripted tours are all that are offered to tourists, then both ideals of tourism are not reached.  Outsiders fail to appreciate another culture, due to the artificiality presented to them, and individuals may or may not benefit economically. Is this what one really expects in visiting another culture?

Those travels magazines and writers we all love? Maybe they should stay on your bedside table along with the historical novels and murder mysteries, because they can be as much fantasy as the fiction we all use to escape.  But the locals? They live with the very real positive and negative results that come of titles such as "UNESCO World Heritage Site."
TAGS: Hoi An, Tourism in Vietnam, Cu Chi Tunnels, Mekong Delta Tour, Tripadvisor, Ratings Manipulation, UNESCO, World Heritage Sites
UA-50707318-1 UA-50707318-1