A common maxim is that learning another language is easier when a person is abroad.  The idea is that a person will be immersed in the sounds, rhythms, and values of the dominant language, acquiring new vocabulary in the context of daily living.  This may be true to an extent, and certainly this belief can contribute to calls that immigrants learn their new home language.  Over the past twenty years, in the United States there has been a political fervor to penalize any foreigners who didn't speak English, including preventing them from driving legally or seeking medical services.  If these people, usually referring to Mexicans or Central Americans, want to be here, then they should learn to speak English.  Who do they think they are?

If the Vietnamese showed the same inhospitality to foreigners as we have done in the United States, I would be surprised.  Let me amend that statement a bit.  If the Vietnamese showed inhospitality to me as a native, white English speaker, I would be surprised.  In fact, it is quite easy for me to stay in my English speaking community in Sai Gon.  Like larger immigrant communities in the United States, I can do all my shopping and day to day living, from buying airline tickets to purchasing spices at the local market to visiting the cleaners, in my native tongue.  My children have several options of English-only schools, which is far more choice than many metropolitan cities offer in the U.S. Moreover, even when I am trying to interact on a business deal with someone who does not speak English, then a person with some English will be called forward to assist me.  In these circumstances, my Vietnamese-English app and a calculator usually help us to finalize the details for the transaction. Even though I do not speak Vietnamese, no one expects me to learn it.  Many expats don't.

Vietnamese is a difficult tonal language, partially influenced by Khmer and Chinese, and for this reason, along with the relative ease of navigating in English, many expats don't become fluent.  The people in the north claim to speak it more eloquently, with many university teachers traveling to Sai Gon to instruct nonnatives and natives alike on the nuances of the language. All words are single syllables, with the meaning expressed through one of six tones.  Plus, there may be variations in word combinations that also signal different meanings. The word for bear bile, mật gấu, differs only slightly for the word for honey, mật ong.  Many expats try to say "thank you" (cảm ơn), but report that they've been corrected for telling their intended audience "to eat" (cơm).  As you can read in my post about Google translate, there can be some amusing mistranslations between Vietnamese and English, due in part to the difficulty of both languages.

However, there are times when the use of English in print seems to be poorly translated by someone.  While there are several well-written English newspapers and magazines in the country, I was tickled to see this "newsprint" wrapped around a flower bouquet given to me as a gift for Tet. 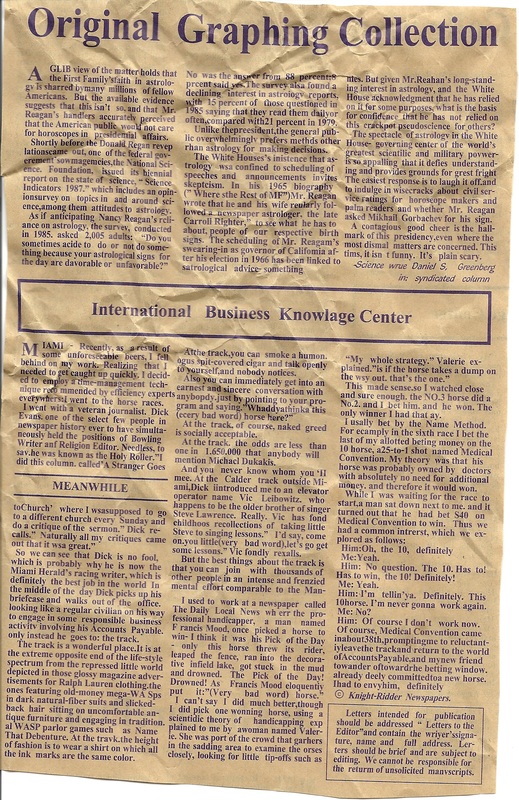 Articles from the 1980's, mentioning astrology, "Donald Reagan", and Dukakis
Not a linguist or a political scientist, I cannot claim that Reagan, with his acting skills, was the first politician to make the absurd seem reasonable during a time of the great arms race, nor can I explain how these articles came to decorate florist shops long after the communists opened their doors to more capitalist influences.  Certainly the misuse of the language was a critique leveled by George Orwell on the precipice of the Cold War:

Now, it is clear that the decline of a language must ultimately have political and economic causes: it is not due simply to the bad influence of this or that individual writer. But an effect can become a cause, reinforcing the original cause and producing the same effect in an intensified form, and so on indefinitely. A man may take to drink because he feels himself to be a failure, and then fail all the more completely because he drinks. It is rather the same thing that is happening to the English language. It becomes ugly and inaccurate because our thoughts are foolish, but the slovenliness of our language makes it easier for us to have foolish thoughts. The point is that the process is reversible.

George Orwell was criticizing the use of obfuscation, tired mixed-metaphors, and vagueness of speech to hide meaning; he contended poorly composed writing "is designed to make lies sound truthful and murder respectable, and to give an appearance of solidity to pure wind."  Clearly, a translation burdened with errors, possibly "as a result of some unforeseeable beers," can muddle the message so that it is pointless to attempt to communicate.  I may do better with my charade dance I use as a last resort after my "Pictionary" drawings and Vietnamese labels don't convey my meaning to the native Vietnamese speaker.  Mistranslation between the two languages or the use of vague phrases, usually in English, confound the reader more than illuminate the idea.   Precise language is tied to the values of the culture, and it communicates those values explicitly.

For example, terms of address in Vietnamese signal one's respect for the intended audience.  To speak to someone older than you, you must address him or her with the honorific of the elder person.  Someone who is near your age or a little older may be referred to by saying "anh em" (brother) or "chi" (sister).  For this reason it is important to know someone's age, which can be tricky in a country where so many people age well. Respect for authority is communicated from the beginning.  To the English native, Vietnamese refer to an older woman or a female of greater stature as "madame," and to a man, "sir."  Respect, furthermore, should be expressed through calling someone by his or her first name and attaching to it a title of "Ms" or "Mr." While the Vietnamese language exhibits an inherit respect for authority and has these wonderful terms of address, there is a real need for people to learn English and the cultural nuances of its native speakers.

Click on image to enlarge it.
Recently this advertisement for "native English teachers (preferable white-people from the US, Britain, Australia" was posted on our community forum.  This online neighborhood has 3,000 members, and is definitely a means of staying informed about happenings in the community.  Part gossip mill, part penny sales / want-ads, the webmaster outlined the following topics as acceptable posts:

GENERALLY OK
- Aerobics
- Yoga
- National days
- Exhibition openings
- New restaurants (in District  or of particular interest to expats)
- New shops (in District  or of particular interest to expats)
- Seasonal food availability
- Modified opening and closing hours (within reason)
- Real estate (if you're trying to find someone to take over your lease, or you own the property)
- Bazaars
- Charity events
- Volunteers wanted
- Animals looking for new homes
- School open days (within reason, some schools seem to have one every week!)
- Second hand furniture for sale
- Helping domestic staff find new placements
- Language classes
- Music tutors (although consider advertising on Vietnam Parents Network)
- Psychologists/occupational therapists/speech pathologists
- Craft workshops
- Questions about anything to do with living in Vietnam

NOT OK
- Maid/staff/employment agencies
- Real estate (if you're an agent, or you will otherwise profit from the listing)
- Animal sales
- Schools (announcing admissions are open, non-public school events, etc)
- Restaurants (reminding us they exist)
- New furniture for sale
- Amway, Avon, Tahitian Noni, Oriflame, Mary Kay, Herbalife OR anything sold via a multi-level marketing schemes
- Job searching or recruiting for non-domestic staff
- Answers without preceding questions!

So feeling a little like Julian Assange and the wikileaks of Viet Nam, I redacted the responses to the advertisement for the preferably white English teachers.

Click on image to enlarge it.
Now even I, a native speaker, need some help understanding the meaning of the last response.  Does the writer feel that Viet Nam or the community response is ridiculous?

It would be hypocritical to think any culture is free of racial stereotypes.  Even when laws are passed to criminalize hateful speech and actions, people can't help but vocalize their misconceptions.  Singapore, for example, has a law against seditious speech: "Under the Sedition Act, it is seditious to, inter alia, promote feelings of ill-will and hostility between different races or classes of the population" (Jaclyn Ling-Chien Neo, 2011). According to Professor Neo, the race riots of 1964 eventually led to the application of the sedition law to speech that is hateful to racial or religious minorities.  The law began to be applied in 2005 due to incendiary blog posts against Malays, calling Islam Satanism.  Yet while governments can legislate speech, they cannot change people's minds. 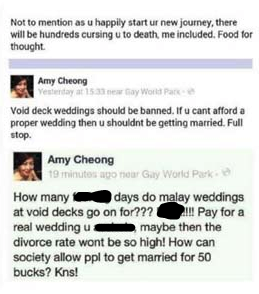 This FaceBook post from Trade Union Leader Amy Cheong was made in October 2012 and immediately got her fired.  As reported in the Australian News, Singaporean leaders denounced her speech and acknowledged that "there are deep fault-lines in our society, based on race and religion."
These racial fault-lines exist everywhere. Perhaps the Vietnamese are only more blatant about their racial bias.  Hiring Filipinos as English instructors recently caused quite a controversy and confirms the racism alluded to by the neighborhood forum,

The principal of another primary school in HCMC said she has hired foreign English teachers based on her own criteria.

“They must have blond hair, white skin and blue eyes. They must respect Vietnamese teachers and students as well,” she said.
HCMC criticized for hiring Filipinos to teach English

This principal obviously didn't think she needed to hide her racial preferences behind euphemisms. The article clearly illustrates both the economic concerns around the controversy as well as the concerns Vietnamese teachers feel; yet it concludes: 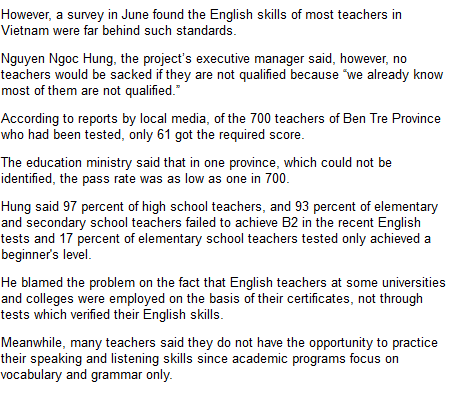 People try to speak English, and they understand its importance to their economic future.  At one time, Russian was the predominate foreign language following the war because it meant trade.  However, commerce cannot be the only motivator for developing fluency.    As Orwell noted, " Modern English, especially written English, is full of bad habits which spread by imitation and which can be avoided if one is willing to take the necessary trouble. If one gets rid of these habits one can think more clearly, and to think clearly is a necessary first step toward political regeneration: so that the fight against bad English is not frivolous and is not the exclusive concern of professional writers."

In my effort to "think more clearly," I come back to another maxim: education is the key.  The country needs educational reform in the area of English instruction and in teacher education.  That, however, doesn't address direct and blatant racism, nor will it likely change people's perceptions around ethnicity.  Knowing that I hold a place of privilege as a white, native English speaker, I should appreciate the efforts people make to speak to me in my own tongue as well as try to learn more of their language. May language not be considered "the exclusive concern of professional writers," but a concern for all. Through improved English proficiency, we may be better enabled to understand the other side's values and maybe even respect one another more fully.  Perhaps some day nonwhites and national Vietnamese may be welcomed to apply.