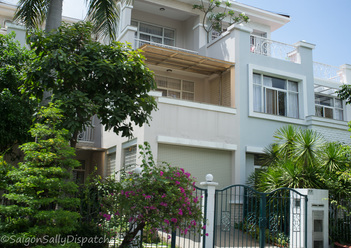 Calling all actors on set. Phu My Hung will be today's on- location setting. Offering a modern small town hub, Phu My Hung attracts Vietnam's film industry for its clean wide streets, a less crowded environment, and infrastructure that reflects the future of the Saigon.

Yet, I've heard young Vietnamese disparage the area because it has lost some of the city's street side culture to the malls and almost culture-less urbanization.  (See MIT Professor Annette Kim's Interview on Vietnamese street culture.)

Phu My Hung could be in any tropical city of the world, and is growing to look more like Southern California every day, with cookie cutter villas and a strip mall ambiance.  But it offers all the features a Westerner has come to expect, even in its own standardization of the urban environment. 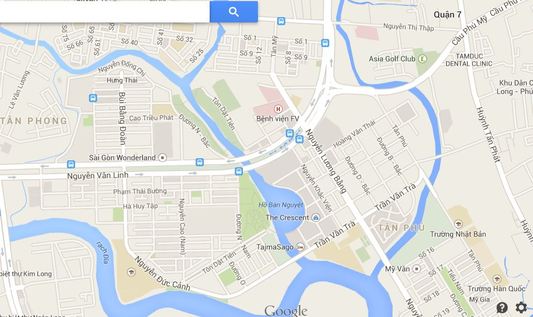 Located south of the city center and in District 7, Phu My Hung was the first community in Vietnam developed with an urban plan, which means it is both more modern, with all the positive and negative aspects of a small Asian city. For their urban plans, check out this link to Five Urban Complex Developments.

To begin the endeavor, a private-public partnership between the HCMC government and a Taiwanese company formed.  The area is run by the Phu My Hung corporation, which owns and manages the land development, and two of the private schools, South Saigon International School, with American curriculum, and the Lawrence S. Ting Memorial School, part of the Microsoft Innovative School Networks, which is open to Vietnamese students.  This is one of the areas in Saigon known for the wealth of the inhabitants.  Rich Vietnamese are attracted to the area as well as foreigners, not only Americans, but also many Asians. The area also supports separate private schools for the Japanese, Korean, Taiwanese, and Canadian communities as well as offering two British curriculum schools, The ABC (Anglophone British Curriculum) International School and The Renaissance School. For a complete list of schools, visit The Saigon Kids website.
Besides schools and Harley Davidson and car dealerships that one would find in any upscale suburban area, Phu My Hung is defined by the Crescent Mall, which offers the Giant chain grocery store, a movie theater, and other international brands as well as several apartment complexes. 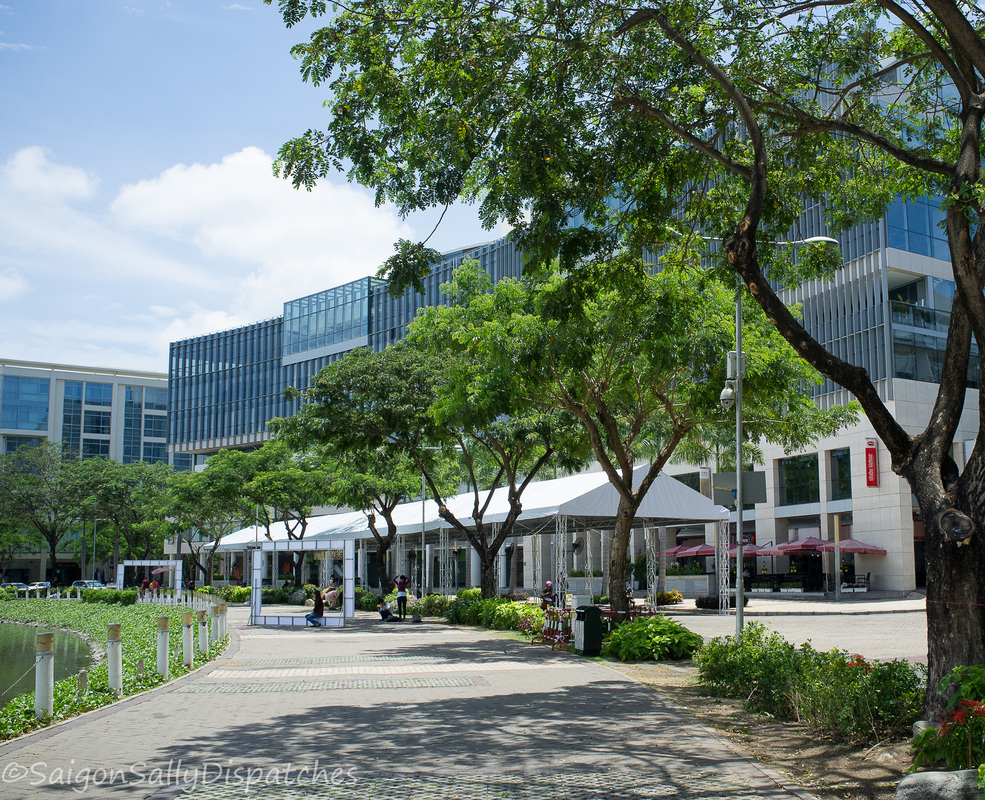 Restaurants border the man-made lake around the perimeter of the mall. Business offices look over the lake too. Phu My Hung is outside the main business hub of District 1 by 10-30 minutes, depending on the number of trucks slowing down traffic. 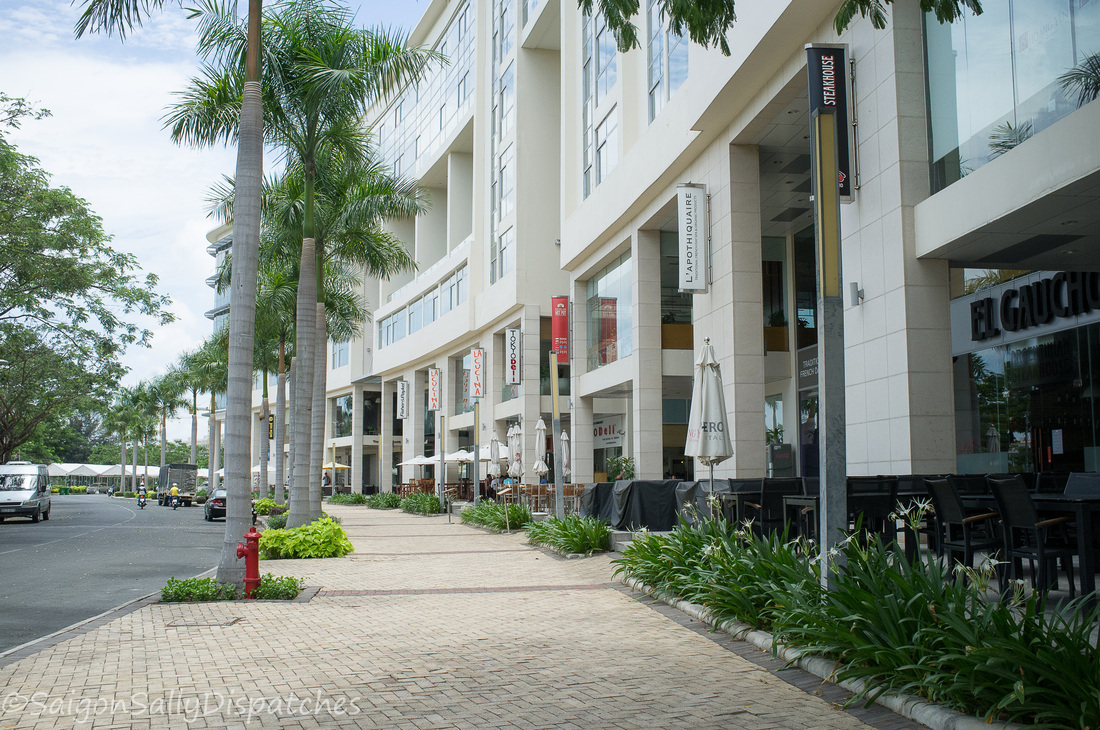 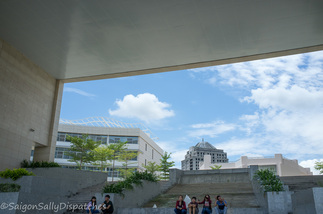 The Crescent offers a place for people to congregate, but you won't
find the small street vendors or many people trolling on their bicycles blaring recorded advertisements for pirated music.  However, people come together in culturally significant ways here. The lake is a place for ever popular wedding photo shoots.  The mall also stages events such as the Tet Flower Festival and offers a local street market in the evenings. Vietnamese culture is preserved, but a little tidier. The area is also appealing to organizations throughout HCMC that support community events, such as the Terry Fox Run and the Color Me Run, which have the potential to bring both the national and foreign communities together.
So this is the downside of losing Vietnam's cultural heritage to the strip mall commercialism of a world economy.  National residents complain there is no good food in Phu My Hung and that it is too expensive for the average person to eat here. Missing too are the numerous coffee houses, small and large, that are independently owned, attracting local Vietnamese. These sorts of places foster community in culturally significant ways as well: business is done, relationships are built, and stories are shared sitting on the corner outside a cafe.  So a string of franchise restaurants and knock-off shops may appeal to a more diverse consumer base, but they also lack the vitality of Vietnam. 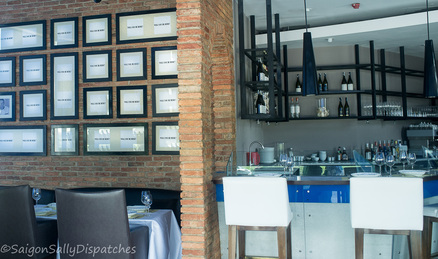 This empty restaurant is a good example of the phantom quality of the Phu My Hung: settings are in place, the bar is stocked, but no customers or staff exist.  Framed along one wall is the repeated question, "Will You Be Here?"

Perhaps it is a staged restaurant created by the corporation's real estate marketing department.  However, if Phu My Hung  is an example of the future Vietnam, then this ghost restaurant could be a warning to the country. 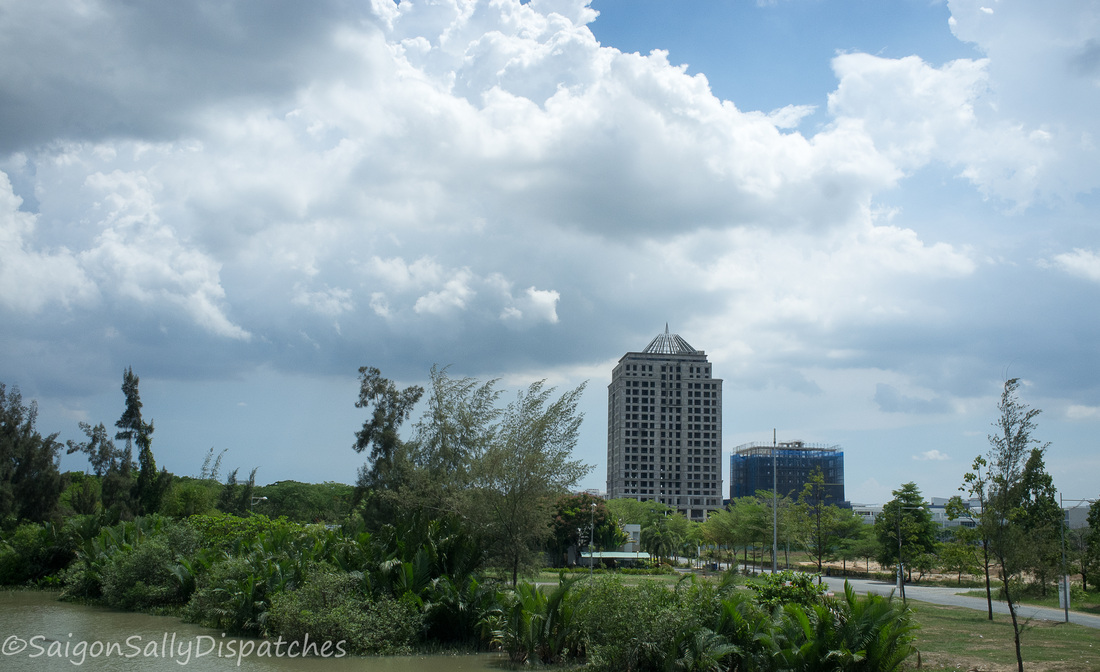 Urban planning offers a "breath of fresh air." To be alive, moreover, communities also need heart.  Otherwise they are empty shells like the building above, which has stood uncompleted for the last two years.  Phu My Hung promises much for the future: bringing communities together, less pollution, easy navigation, and nice homes.  Let's hope it can succeed also in keeping the city's identity.

Will you be here?