The promise of travel guides: tourism in vietnam
April 2013

Flipping through the pages of Lonely Planet while listening to Rick Steves was not the first step to being wooed by the romance of foreign lands.  For many the gateway drug to travel addiction may have been National Geographic with its “exotic” photos of the Serengeti enticing your pudgy ten-year older fingers, your eyes transfixed on the partially clad Maasai jumping high above the sandy plain.  Conde Nast features of Southeast Asian beaches, with photos of white curtains swept by breezes draped around a candle lit infinity pools, did not merely entertain you while you waited in the doctor’s waiting room.  Such glossy travel advertisements beckon.

For many Westerners their first travel experience began with study abroad programs or as backpackers on a gap year.  Some people drop out of corporate life to explore the rugged terrain of otherness. Blogs abound about these experiences, with more experienced bloggers trying to attract advertising revenues on their sites while the publishing houses continue to face consolidation.  A query on Google, “publishing revenues from travel writing,” yields over 3 million hits, directing the reader to advice on finding an audience, from the “Six-sins of Self-Publishing” to “An Entrepreneurial Model for Travel Writers.” 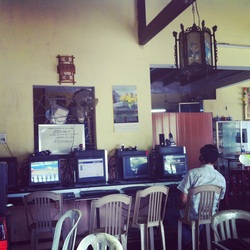 Internet cafe on Chau Thuong Van St in Hoi An
Let’s face it, with apps and “wifi free” (free WiFi) emerging all over the world, going to trade publications or online resources is often the first stop.  Tripadvisor and Frommer’s are the traveler’s virtual friend.  Rather than paper maps, tourists openly carry their dog-ear guides as they wander through the alleys and boulevards of cities where otherwise they would be illiterate, because they do not speak the host country’s language.  Guides are needed, whether in book or internet formats.  With 415 million estimated to have traveled over four months alone, from May to August in 2012, (UNTWO), word of mouth has become an industry.

Yet Tripadvisor, like so many other aspects of the tourist trade, faces pitfalls in Viet Nam and worldwide.  Type “how to improve Tripadvisor rankings” in Google, and you will see over 20,000 hits, including how-to videos on youtube.  The Word magazine reported recently that travelers have been known to negotiate reduced hotel rates for writing a favorable review.  A Telegraph article published in 2012 (Tripadvisor Under Fire Over Fraud Detection)  highlights the problem all travel guides face: dissolution of businesses.  Restaurants fail. Places change ownership. In Viet Nam, businesses often move. A review may be compromised basically just by being out of date.  Owners and investors are also reported to have written reviews themselves or enticed customers to change unfavorable reviews through refunds, which has even happened to me with a vendor through Amazon in the United States.  Reviews are often manipulated everywhere.

So what can the intrepid traveler do?

Turn to the United Nations, right? 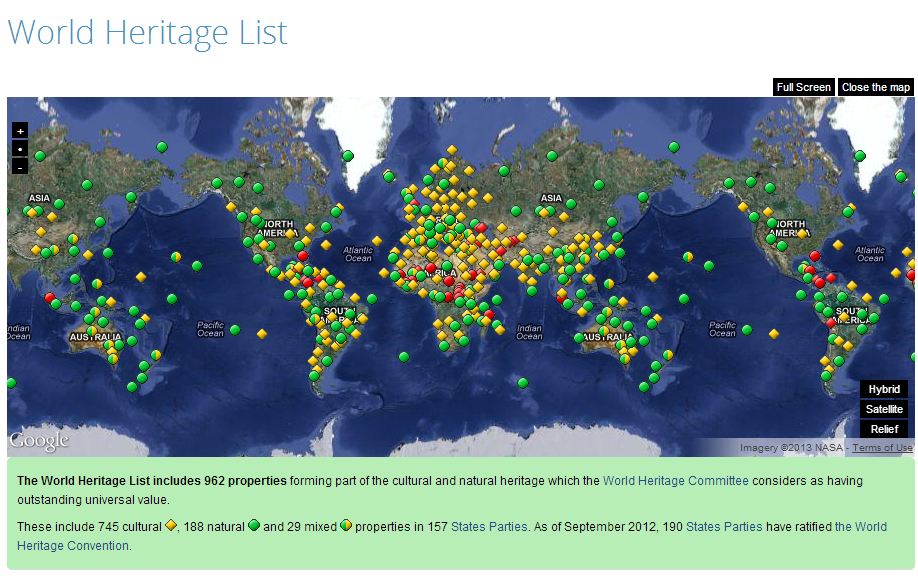 The U.N. has two agencies (UNESCO and UNWTO) promoting tourism, including working with Tripadvisor “to help protect and preserve the world's greatest landmarks.” The UN believes that poverty relief and environmental protection can be achieved, in part, through cross cultural interactions and through preserving locations that "have outstanding universal value." 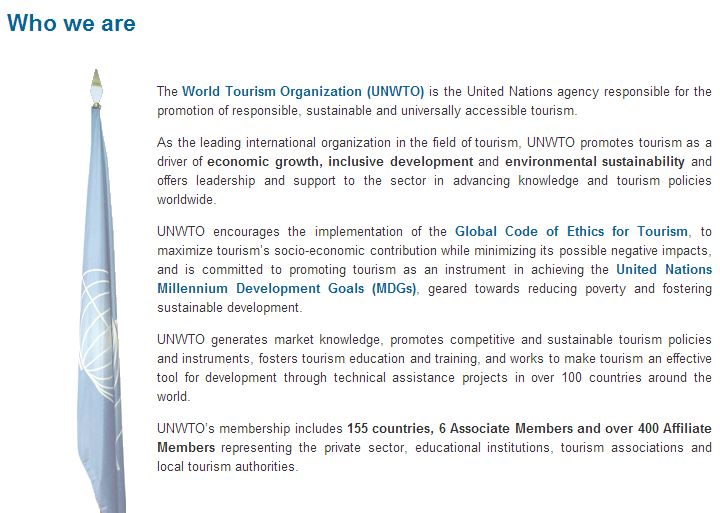 Tourism is seen as a means of developing economies rapidly, generating jobs, being pro-poor, and facilitating cultural understanding.  The U.N. has been active in helping the Vietnamese government formulate a tourism plan, and UNESCO is aware of some of the difficulties the country faces as it continues to grow its tourism trade since the economic reforms of 1986, the beginning of the Doi Moi, or Renovation period, when it became legal to do trade with the world.

Effects of Tourism on the Worldwide Economy
Before the 1986 all hotels and the tourism industry as a whole were run by the government.  The Ministry of Tourism still regulates the industry, but doi moi brought tourists from outside the former Soviet bloc, who demanded more features and attractions, which resulted in the broadening of the tourism industry through outside investments and partnerships. Today, Vietnam Airlines and SaigonTourist Holding Company, both state-run companies, account for bringing in 88% of total sales of air travel as well as running hotels and tour groups. 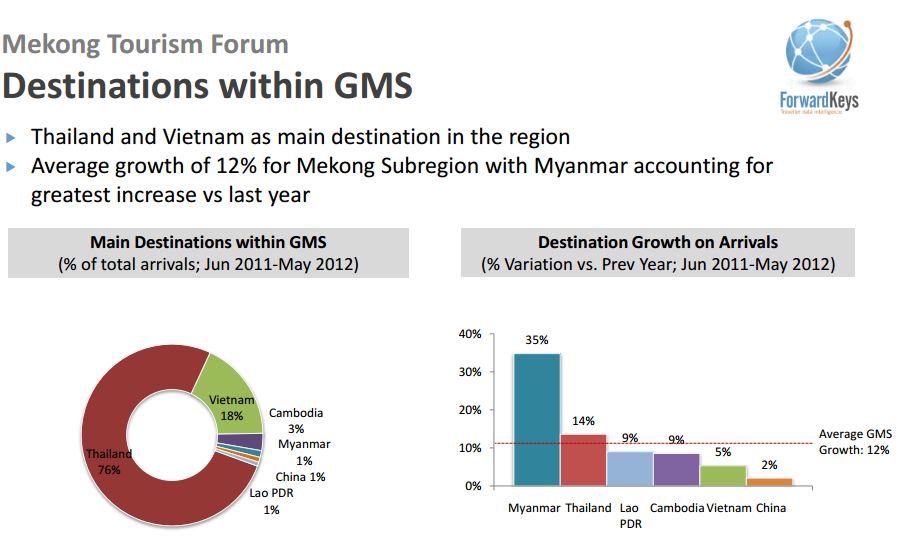 Forward Keys is a Research Center for Tourism
But what is the tourist experience like in Viet Nam? Unfortunately, it is easy to be trapped like a fish in a farm pen, directed to superficial views of the country with little of the interaction or authenticity a traveler may seek.  This is likely due to the preference of travelers, who rave about their experience in Viet Nam, not necessarily knowing how to get out of the tourist trap or even that they are stuck.  In general, the country does a very good job separating foreign visitors from the Vietnamese traveler, with little cross-over between the two populations, which is likely universal in the developing world where Western visitors are not “comfortable” with the standards accepted by the relatively poorer, local population. Or, as was explained to me by one manager of a tourist company, Vietnamese go other places in order to be with family, to eat, and to shop.  Foreign visitors “want nature,” regardless if they travel from Australia, Korea, or from further shores. 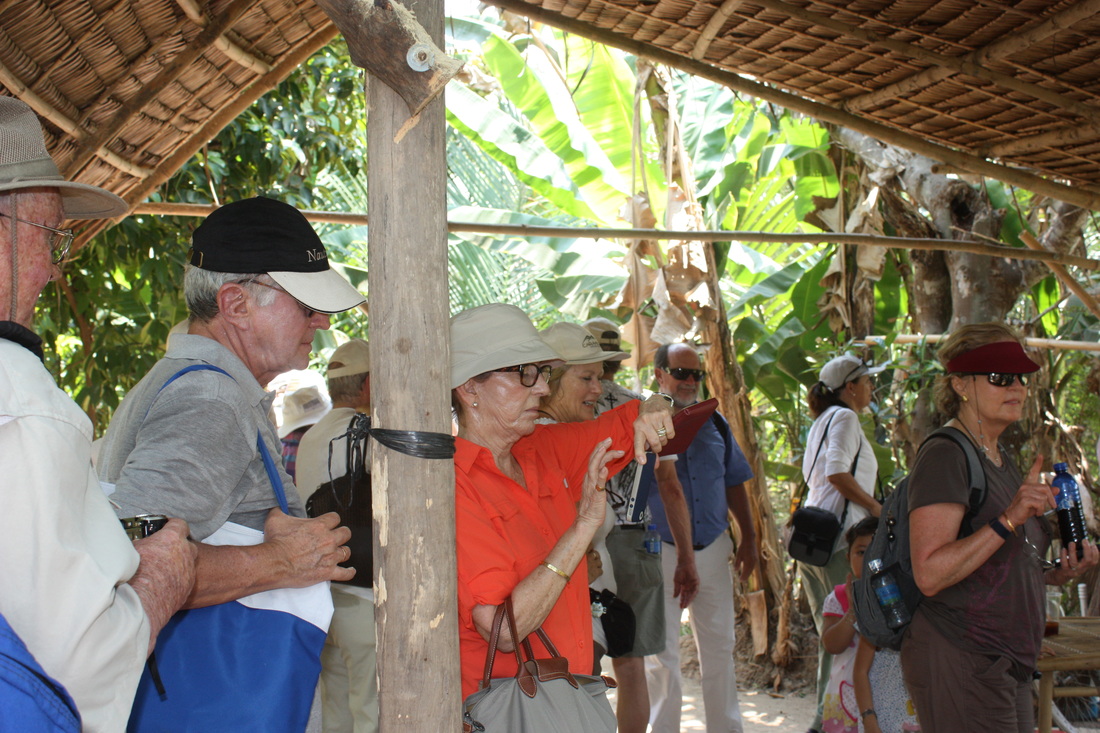 Tourists from Spain enjoy the Mekong Island "natural" atmosphere.
No one wants to spend thousands of dollars for airfare and say they had a terrible experience, moreover.  Perhaps this is why we rely so much on our virtual guides and tour companies.  However, in Viet Nam your tour company may be state-run, such as Tien Giang and Ben Tre Tourist in the Mekong Delta.  Launching from My Tho, (1.5 to 2 hours from Ho Chi Minh City), one can visit several islands and experience the Vietnamese culture and fruit, whereby a troupe will serenade you, “If You Are Happy and You Know It” while not knowing the meaning if the words.  This is after the boat parades you next to the poor fishermen’s shacks in order to highlight either their industry or to peek into their poverty. I’m not really sure which motivation was the goal, as nothing is really communicated about their lives, other than they have been fishing off the river for years.  The tour guides seem to keep to script, with little improvisation.

The Cu Chi Tunnels are a good example of a state-run tourist attraction, which happens to be in “nature.”  Run by the military, for a small entry fee and payment for a tour guide, visitors can shoot AK-47s after watching a propaganda film from 1967 and exploring the underground network of tunnels which led to victory and reunification of the country.  On many levels this is an interesting experience, not just because it won’t be as you expected it to be.  There are two locations, with Ben Duoc being farther from Sai Gon than Ben Dinh, but the tour is the same.  The displays are virtually the same, and probably the script is as well.  The last tour guide had so many well-timed jokes and puns he delivered without a twinkle in his eyes that I was almost convinced his performance was written by his superiors.  Unlike the My Tho Mekong Delta tour, the Ben Duoc surrounding area does appear to be used by Vietnamese, as there was a school group in uniform near the river on the other side of the temple.  The temple turned out to be a memorial for the war heroes, with historical mosaics on the outside and a giant statue of Uncle Ho inside the building where one would normally find Buddha. 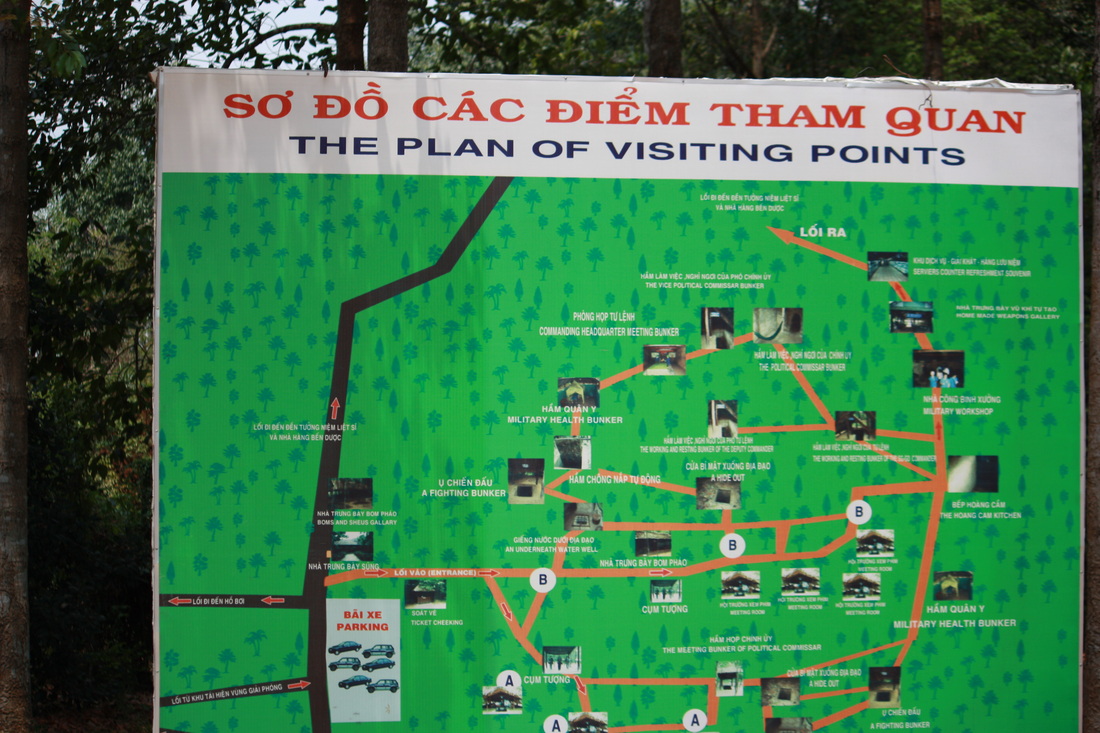 Within Sai Gon and elsewhere in the country, however, there are several tour groups that are not state-owned, and they run the spectrum on quality.  In selecting a company, go with word of mouth, not Tripadvisor, but friends who have taken the tour recently. And these must be real friends.  (There are plenty of people who will steer you toward a company expecting to get a kick-back, increasing the price of the service by at least 30%.)  “Word on the street” (aka buddies) makes motorbike tours popular these days.  Be prepared for mild heart palpitations as your motorbike guide drives you out of a roundabout headlong into the approaching traffic.

An attraction with the UNESCO seal of approval is sounding pretty good by now, right? 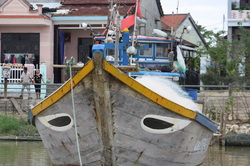 To learn more about how tourism and the UNESCO rating have effected the city of Hoi An, read about it here.