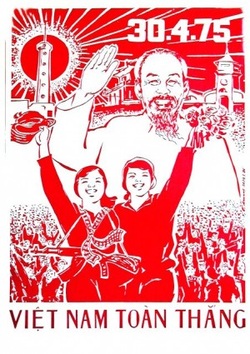 April 30, 75 Vietnam totally victory
The other day, I popped into ArtBook, where they sell reproductions of vintage propaganda posters from Viet Nam and the USSR, of peasants rising up to a red dawn and Stalin hunched over a desk in a darkened room.  The Americans? Well, they have the propaganda of a different sorts.  America is represented by movie posters in the same inky print, from Blacksploitation films to Harry Potter and the Deathly Hallows Part 1, where the protagonist is outlined showing half of his noble teen self and the other half, Lord Voldemort.

“Who buys these prints?” I asked the young attendant. She smiled and didn’t answer.

“Do you have these pictures in your house?”

She slowly shook her head every so slightly back and forth.

“Of course not. So who buys these posters?” Just then, an Aussie came into the shop and piled three Soviet lithographs to one side.

“So did you pick out the Stalin?” I asked him as he sifted the prints.  We stood across from one another like people once did in record shops, fanning through covers for the right image to find affirmation and affiliation.

“Yeah,” he drawled, “I promised I’d get three political posters for me and three art posters for my wife.” The shop clerk looked on us both as he explained, “Last time I was here, we picked up a few and she now she wants more.”
One sees billboards in the same vintage style propaganda all over the place.  There are posters commemorating Uncle Ho’s birthday, and, in the smaller communities away from tourists, posters warning in blocky letters about AIDS.  Slowly commercialization may change this trend, however.  For Tet, amidst the festive undulating L.E.D. lights that roped and twined through square, the center roundabout alternately advertised Domino’s Pizza and Kentucky Friend Chicken.  Following in the path of the United States, next the concrete walls of the stadium may be adorned with the monicker, the MobiFone Center.  Billboards on the steel barriers of skyscraper developments show happy families, father with preschool son on his shoulders and wife swinging a tote as if she is in a fashion magazine.  Propaganda and, its sister, censorship, are one way of telling the story of a changing city. 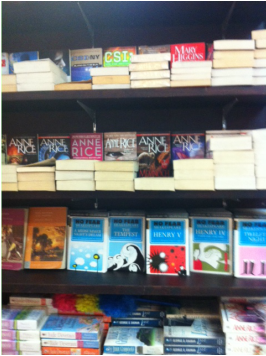 The ministry of culture must approve any book before it is published or distributed.  I’ve heard of customs delaying access to household goods, because they review the contents of the shipment.  The code for what is allowed to enter and what is confiscated is allusive.  Yet there are tomes dedicated to the Kennedy clan on the shelves of Fahasa, the state-run bookstore.  I was also delighted to see a copy of T.C. Boyle’s book about Frank Lloyd Wright, The Women, and imagined the conversation between censors about its content.  Maybe a clerk passed it off as an architectural digest. In the same vein, Jude Devereaux is housed next to Anne Rice and No Fear Shakespeare.  There seems to be no discrimination in book placement other than the easy order applied to the many rows dedicated to workbooks for learning English, which are organized by difficulty.

I patter away to strangers in English, regardless if they understand.

“You are learning English?” The young man whom I address beams and nods his head.

“What level is this workbook?” I ask turning it over at the cashier’s counter. “Is it a good workbook?”

A silent nod, still beaming, is his response.

Herein lie the real stories, the ones not communicated through a government or economic filter.

Make eye contact, smile, say, “Xin chao, Ba,” (hello, grandma), and the older lady will smile warmly, lottery tickets flowering her linen shirt like a lei, and she will be so pleased you recognized her and showed her respect.

The other day, the gardener cupped her hand to by cheek when I told her my name and asked how I should address her.  Her smile often dances in her eyes, but seems partially frozen from a stroke on her lips.  She caressed me with many words, which flowed after me as I continued on my bike down the street, her name, Madame T, tucked in my ear. 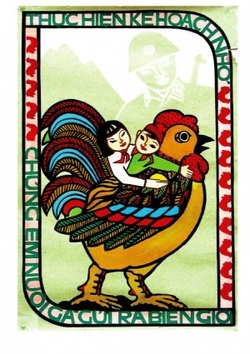 Realizing the ‘small plan’ We, children, raise the chicken to send to the frontiers.
So why does the city promote to the Westerners an image so rooted in the past?  I admit I found the propaganda reproductions intriguing.  But why feed this desire when there is so much else to offer?

What is a story without conflict?

I realized this week the blog may be short-lived. Expats tell stories about being in opposition to the nationals, perhaps in part to make sense of their own lives, or maybe as idle entertainment. This experience shouldn't be one litany of complaints and sense of otherness.  At some point, I cannot always feel in conflict with myself and the transition here.  Speaking too much about the community would be a violation of my sense of honor and social suicide.   So what is there to tell if there is no conflict?

In the same way, this must be true about the image they feed to foreigners here.  The story of the past is a comfortable one, in the sense that we all know what happened and it is easier to glorify the ascension of communism than to tell the story of how the people in the south suffered after the country was unified.  It is easier to romanticize Stalin than to admit he murdered thousands of his own countrymen.  In no way does this absolve the U.S. government from its actions in the same period.  This is a country of reversed fortunes, which are the hardest stories to share with foreigners.

So, it is easier for the story-teller and the foreign audience to accept the story that is rooted in the past.  No one wants to have family matters aired to the world.  Those who fall in either the Sai Gon camp or the Ho Chi Minh City camp only share their history in the quiet murmurs of family discussions, in the shared understandings of how they came to where they are today.

Like Boyle's protagonist, as described by New York Times reviewer, Joanna Scott, I can only infer things based on observations in both what is omitted and shared openly. Like the narrator, I will never know if my observations are accurate, "Tadashi doesn’t hide the fact that his view of Wright is limited. In an introductory passage, he explains: “I was a cog in his machine for a certain period, one of many cogs, that and nothing more.” It helps, he says, that he knew other apprentices, along with Wright’s third wife and his children. Familiarity, though, doesn’t necessarily give him access to the whole truth. At one point he asks about Wright, “But did I know him?” — a question that will resonate through the novel as Tadashi offers his own revealing yet limited account of Wright’s romantic entanglements."  Perhaps the most trustworthy narrator is the one who doubts his own version of the story.

As for my voice and the stories I choose to share?  I am going to consider the advice of Alexander Fuller in an interview about her book, Falling, in which she chronicles her divorce.  Fuller is an expat living in the U.S., who spent her child in what was formally known as Rhodesia. She was interviewed by Pheobe Judge for the radio show, The Story on March 15, 2013.  In the interview, she describes how excited she was to have freedom of speech and how important it is to exercise it.  In order for a woman writer to find her voice, she must break taboos.

It is our mothers who give us our voice, but it is the men in our lives who either give us permission or against whom we fight to use our voice...I was taboo breaking, which is to write within the family. I said this, a writer, her first job is to court eviction from the tribe.  One should never belong to a tribe as a writer.  It limits you, dangerously.