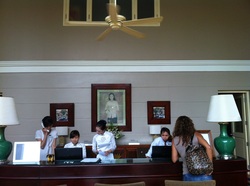 Living in Vietnam, suddenly I found myself appointed as a concierge to people previously unknown to me.  Since moving here, I've been asked how to find the English speaking Masses, my opinions on tour companies in Sa Pa, and where to buy silk pajamas.  I don't mind people approaching me, and I use visitors as a chance to see parts of the country I wouldn't visit in the day to day experience of living here.  However, it can be a bit like when acquaintances in countries outside the United States ask me if I can drive to Georgia from San Francisco to visit their fourth cousin of their father's half brother.  There are limits to what I know, people I know, and what I am willing to experience.  When the next set a friends say they want to visit Cu Chi Tunnels, I will politely decline seeing the attraction for what would be my fourth time.

It wasn't until I attended tours with a friend who had gone to the former Soviet Union as part of a school delegation, did I begin to understand my increasing discomfort with recommending tourist attractions and tours to visitors. Consulting travel guides before arriving in a country like Vietnam seems like a good process for preparing such a long journey.  However, as I illustrated in my post The Promise of Tour Guides, doing so isn't always profitable to the tourist, nor can it always yield a positive experience.  In part, this is due to the lingering influence of the Soviet Union over 20 years ago, which still pervades the tourism industry in Vietnam.

“Reflecting its suspicion of foreign influences, in 1996 the g_overnment even broadcast a warning that some backpackers might be spies (Biles, et al., 1996).” 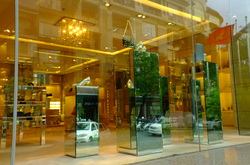 Vietnam is still having a hard time sloughing off the Soviet era tint that has influenced its tourism industry since its inception in the 1980s.  Such a way of thinking led some governmental officials to make the spy claim 17 years ago.

While shopping malls spring up every month, Vietnam still is very much a communist country, although it hides this fact to the West behind capitalist urges a la Chinese growth.  The country has a strong history with Russia and with the former Soviet government, and it benefits from continuing investment from countries of the former Soviet bloc as well as from Moscow, (especially in petroleum as well as arms and military equipment. See The Bear is Back: Russia Returns to Vietnam). As such, their tourism industry has developed from this Soviet base and practices.
When centrally planned economic strategies failed and Gorbachev started opening up the Soviet Union, Vietnam started a program of Doi Moi, or economic reform, which entailed attracting a new set of tourists to the country in order to foster foreign investment.

This posed a new set of problems.

What to do with Western foreigners?

On one hand, a country wants to show how well its government works.  To do so, one cannot let the foreigner see areas that are underdeveloped or unattractive to the foreign eye. 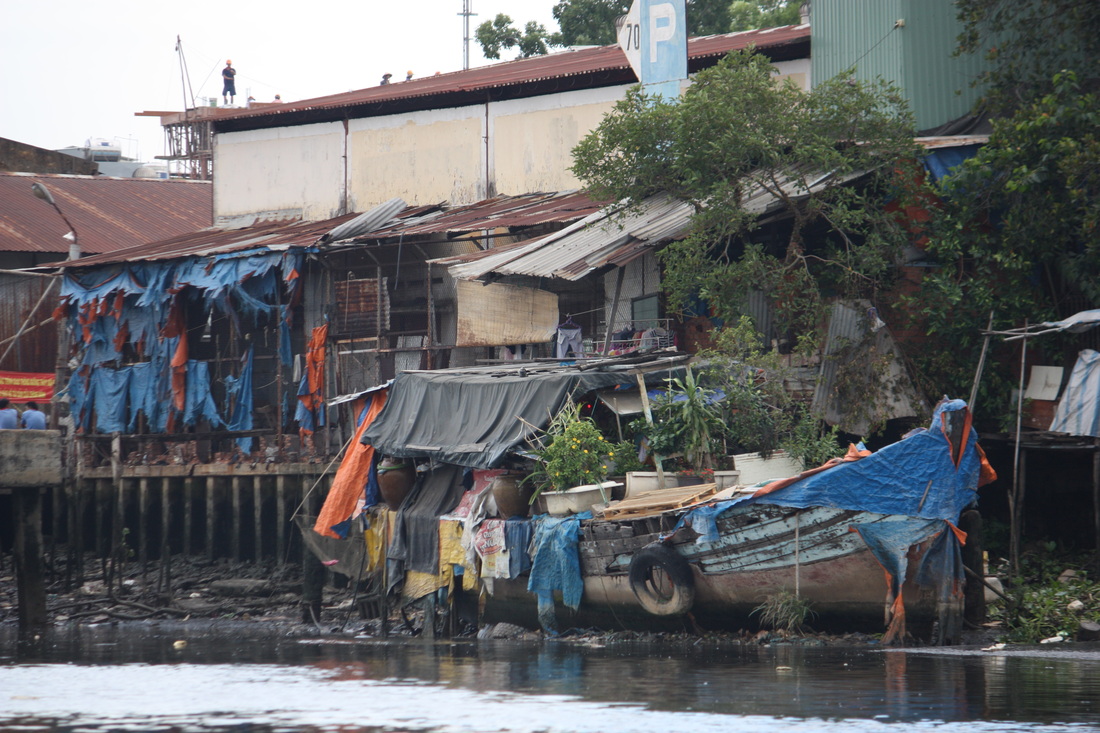 Therefore, Vietnam began its own means of regulating the numbers of foreigners, through sometimes ad hoc visa decisions, and also through initial travel restrictions in the same manner the Soviet Union used to monitor visiting Westerners, 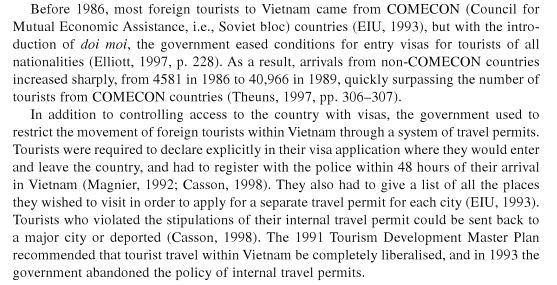 Today the Vietnamese government strictly monitors visas as well as requires hotels and lodgings to register and hold passports for the police. VNAT (Vietnam National Administration of Tourism) reports that the various ministries and law enforcement offices bemoan a weaker surveillance system of foreigners because ”So far, however, there has not been a consistent co-operation mechanism for managing foreigners in Viet Nam, which makes it difficult to keep track of foreigners' activities and poses several problems to social order and security in the country.” (Foreigners on VN Agenda, July 23, 2013) 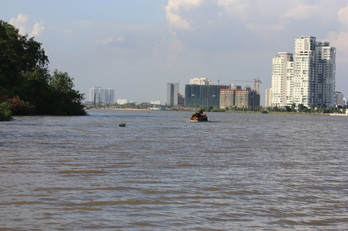 Visa restrictions, of course, are the purview of every national government.  Moreover, terrorism is considered a threat world over. However, similarities with Soviet era continue to effect the tourist experience today.

Many tour guides attend government university programs and as with art shows, books, and other cultural projects, tours must be government approved for locations and content.  This in itself may not be bad, as all countries have governmental or quasi-private organizations to promote tourism.  However, the guides and itineraries here can very much have the stale, propagandist, and cold tenor of the Soviet Union.  While the good guides are personable and knowledgeable, they still very much keep to a script.

According to the Finish report, "Since Soviet tourism served an ideological purpose to construct a positive picture of the country, the tourist guides had quite an important task to perform. The guides were well trained with academic background and special courses; they were able to use various languages quite well, and the tourists appreciated their “technical skills”. According to Galina Sergeeva, herself a former guide, a Soviet tourist guide was defined as “a fighter on the ideological front, one who propagandises the achievements of the building of communism and the Soviet way of life” (Kostiainen, A. 2002).

While not all the propaganda in Vietnam may be overtly targeted to the foreigners as at Cu Chi Tunnels, as the Cold War is over (even the Asians have to admit), the script still falls short.
"The Soviet system of tourist control may be compared with the concept of “the back” and “the front” of tourism sights presented by sociologist Dean MacCannell. According to MacCannell, many factors involved in tourism may not be understood or confronted by the tourists, and those factors may be quite essential for understanding the whole of the tourism system. In the Soviet Union a foreign tourist was able to see and meet with the “front” factors such as museums and
ordinary sights. However, usually he did not meet the real “back” of tourism such as the actual life of the Soviet people or the guiding political system" (Kostiainen, A. 2002).

Many people who reside here feel Vietnam is a place to live, not to visit. There are not that many places to see in the "front", apart from war museums, historical reenactments such as Cu Chi Tunnels, and craft villages that are developed to promote the ideology of the State.

Moreoever, part of the problem the country faces is that every region has its own tourism department, which may or may not promote the same message about the country or understand fully the desires of the tourist.  To complicate this further, historically the country recruited the business person, not the backpacker, and tour companies from outside Vietnam promote a very different agenda.  The national government wanted to create an image of

Add one part heavy handed propaganda, a dose of paternalism from the West, and mix that with general confusion in understanding the tourist market, and you can get a product that becomes stale and lifeless.

The solution, according to VNAT, rests in cultural craft villages, where foreigners can purchase souvenirs. "Instead of focusing on the luxury consumer market for exports, the villages need to focus on popular souvenir market segment. This market segment is very exciting and brings great revenues" (Craft Village Tourism to Tap Potential, Oct 24, 2013). 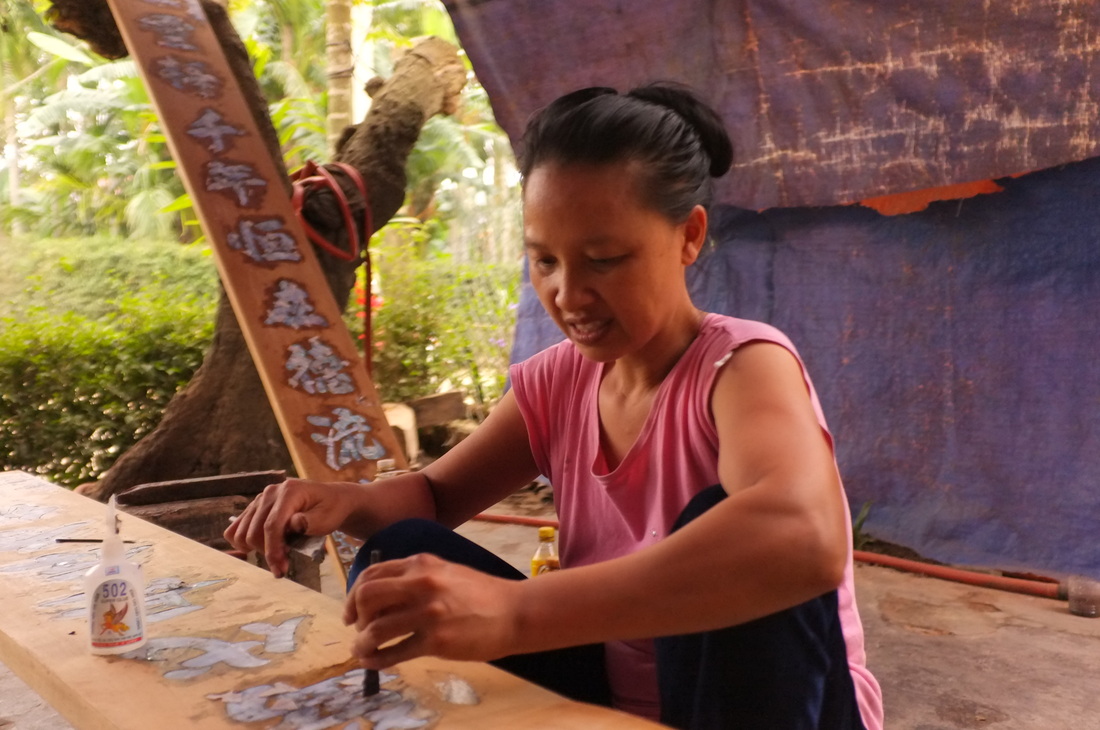 According to the government, tourists want trinkets over learning about the people's cultural traditions.  As mentioned in a previous post, Hoi An has been an profitable model in bringing outsiders to the trinket trade. (See this post on Unesco's Effects on Hoi An).  A person can only say no for a while before becoming worn down by the constant sales barrage. 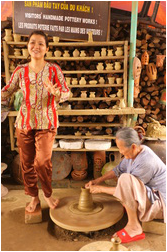 Yet VNAT recognizes these tourist traps aren't really successful.  The government believes this "front" interaction can be a key to their tourism industry, but "conferences discussing the development of village tourism have been purely based on the subjective judgment of the State agencies or professional studies. This sometimes makes loss of accuracy from reality"
(Craft Village Tourism to Tap Potential, Oct 24, 2013).

Loss of accuracy from reality?

The regulated and controlled tourism industry cannot accurately assess the reality of the tourists' desires.  Or more simply, there is little for the tourist to gain by visiting a pottery village that does not actively run kilns or have workers making the pottery they sell.  Moreover, the fact that every household shop sells the same bric a brac is evidence this is not an authentic experience with the local people.

"It was even possible to organise specially planned group trips to smaller country towns, primarily in the form of delegation visits. Tourists could visit, for example, a sovkhoz or kolkhoz to get introduced to the growing of cows, pigs, potatoes or some other farm commodity. These visits needed to be scheduled well in advance and, of course, were engineered to show the progressive sides of the Soviet economy" (Kostiainen, A. 2002). 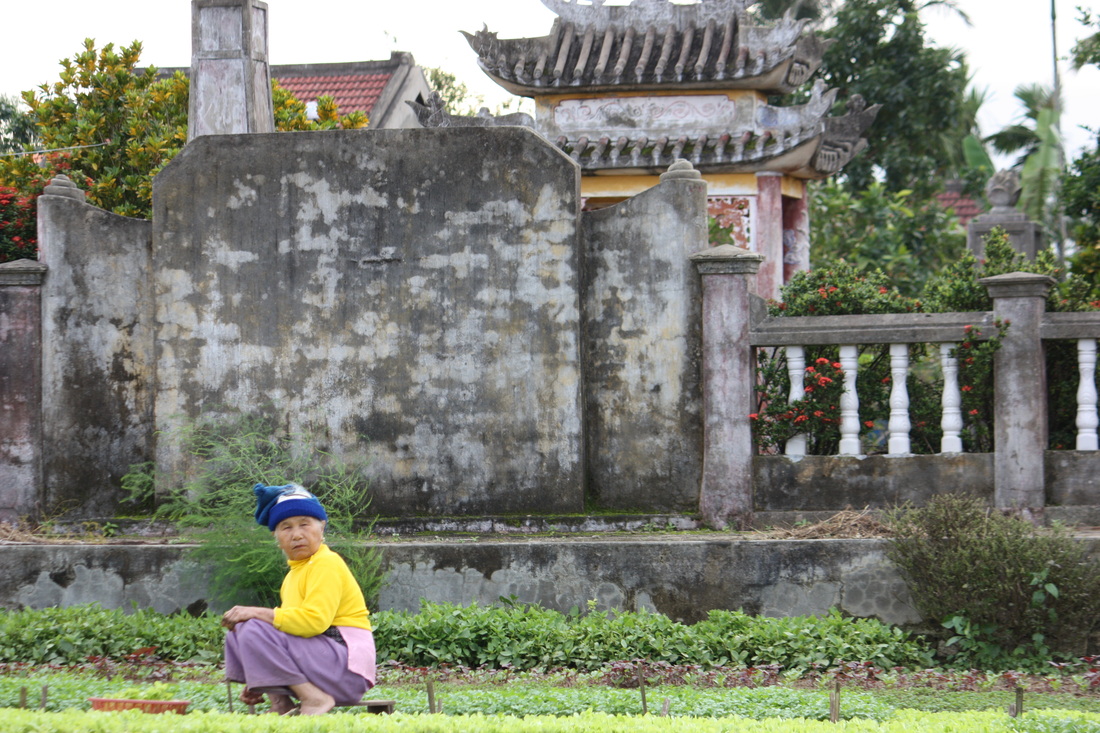 It's time for Western owned tour companies to stop promoting Vietnam based on "romantic notions of its feudal past" and it's time for foreigners to see places like the Tra Que farming commune for what they may truly be: engineered scenes to "show the progressive sides of the economy."

When people emerge from the social network to ask me to act as a concierge, this is my message to them:

Stay away from government tours and state-owned attractions.

Pull up a plastic stool sized for a six year old on one of the sidewalk cafes, order a 333 or a caphe sua da, and watch the city pass before you.  You'll not have to experience the monotone of a Soviet influenced tour guide; rather, you'll experience the living voice of the people, falling and rising.
UA-50707318-1